Throughout this year, Ukiah native and resident Adrianna Oberg has crafted a number of posters that brilliantly convey the spirit, messages, and tactics of the resistance to the CalTrans Willits Bypass.  Some of Adrianna’s most recent work — including her “Rise to Action” poster above, shirts that bear messages like “Life is Priceless” and “We Made The Machine; The Machine Didn’t Make Us!” and a t-shirt supporting the California prisoners’ hunger strike earlier this year — are now on display at the Mendocino College Art Gallery.

“Her work is extremely powerful and visually compelling in addition to being well-executed,” Wier says. “Oberg has a style that is both uniquely hers as well as very much reflective of Mendocino County’s counter-culture history. It literally grabs one’s attention which, as political protest work, is obviously extremely effective.”

Weir continues, “It is not included in this exhibit by virtue of its protest content and its inclusion in this exhibit is certainly not an endorsement of either side of the bypass debate nor prisons nor any other issue or cause. The gallery context has the power to shift how we read and relate to visual culture and, if anything, that is what I want viewers to be aware of and take away. In putting Oberg’s original protest drawings on the wall of the gallery, I intended to call attention to them as art.

“Even though her canvas and surfaces are not precious (copy paper, scraps of cotton, old t-shirts) they hold their own in the gallery setting. That creative use of material was another reason for her inclusion. A number of other artists in the exhibit also mix media in ways that are innovative such as Rose Easterbrook’s photo painting collages or Genine Coleman’s bone pigment on buckskin redwood.”

Regular gallery hours are Tuesday through Thursday from 12:30 to 3:30 and by appointment.  The exhibit runs through October 12, 2013.  See the gallery web site for more information.

Adrianna Oberg is currently accepting commissions for drawings.  You can contact her at magic.medicine [+atsymbol+] gmail dot com.

Tuesday, October 1, at 8:30 am. is a pretrial hearing for Ellen Faulkner at the Mendocino County Courthouse. She is charged with five infractions for alleged trespassing on the Caltrans Bypass Project.

Wednesday, October 2 at 8:30 am. is a pretrial hearing for Earthworm and Feather.  They are charged with two misdemeaners for two lockdowns, one on a fill truck on Route 101 in downtown Willits and one on a fill truck at Gate 6 at the Northern end of the Bypass on September 10.

On September 18th, over thirty CHP vehicles descended on a clear cut grove of ash trees, where the eighth tree-sit in the Caltrans Bypass bootprint was located, to conduct an extraction. Riot great-clad officers patrolled the tree stumps below the cherry pickers.  Two protestors who had been living in the tree locked themselves to a pair of its branches in metal sleeves. The photo gallery at the end of this post is from that day.

The extraction took more than five hours.  One of the protesters’ metal lock-boxes was reinforced with concrete, and it took so-called “pain compliance” holds on the part of the CHP SWAT officers to remove him from it.

The now badly-damaged ash grove is 1.5 miles north of Willits, adjacent to Highway 101. It is located in the proposed northern interchange area of the Willits Bypass, where CalTrans’ contractors have been clearing vegetation since April, and have more recently been installing wick drain tubes and dumping soil. The tree sit was on the south edge of the grove, in a valley oak tree that is at least 300 years old. The grove included hundreds of trees and lush under-story plants, which have now been cut down, piled up, and chipped up.

This was the longest tree-sit in the bypass resistance. One of the two protestors who was forcibly extracted on September 18th, who goes by “Condor,” began the tree-sit 137 days earlier, on May 3rd. Since he established the occupation, twelve people in total have spent time living in the tree,affectionately called Polaris by the people who came to know it. Two of these people wrote statements about their motivations for the tree-sit, which you can read here

Tree sits are aerial blockades where someone lives in a platform suspended from a tree to block it from being cut. It is a tactic for defending one’s community and the wilderness. The campaign to change the Caltrans Bypass has been greatly strengthened by tree-sits.  Amanda ‘Warbler‘ Senseman scaled a Ponderosa Pine on January 28rd and lived there for 65 days, until forcibly extracted by CHP SWAT on April 2nd at 7 am. This tree sit energized the opposition to the Bypass and helped keep alive the possibility of a far better outcome for the valley, its residents, its wildlife, and future generations.

Following Warbler’s ascent, four more tree sits were established within a mile of her Ponderosa Pine — two in pine trees, and two in oak trees. All four tree-sits were extracted on April 2nd, following Senseman’s extraction. Bean bag ammunition were fired at one protestor in a pine. Another was cut out of a steel lock-box which locked him to an arm of an oak tree.

After April 2nd, two more tree sits were established North of the former tree-sit sites, along side Hael Creek, in an oak and alders. These sites were strategically chosen to prevent Caltrans from engaging in illegal clear cutting of stream-banks.

And on May 3rd, the ash-grove tree sit was established. Click here to see a Caltrans document describing the 1,815 oak trees inventoried to be cut. Obviously, this list doesn’t include pines, madrones, ash trees, manzanitas, dogwood, wild pear trees, shrubs, grasses, or any of the other hundreds of thousands of plants destroyed for the intended construction of this entirely unnecessary freeway.

Activist Julia Butterfly Hill, whose 738-day tree sit in the roughly 1,500-year-old redwood tree Luna in the late-1990s made her an icon of eco-defense struggles, will speak at the Coalition to Save Little Lake Valley’s October 12th “Take A Stand For the Willits Wetlands!” event.

The roster of speakers is filling out, with Barbara Kennedy of the Save Richardson Grove Coalition and “Oh, My Goddess!” producer Sherry Glaser also confirmed as speakers. We’ll post another update after the full roster is confirmed.

The event begins at 12 noon. Gather at Recreation Grove (E. Commercial and S. Lenore) to carpool, shuttle, or bike en masse to the festivities.

For more background on the October 12th action, see the web page.

There are currently two tree sits blocking destruction in CalTrans’ proposed Bypass route. Since January 28th, there have been seven tree sits in total. Though many of CalTrans’ activities have been clearly illegal, there are no regulatory agencies, courts, or elected bodies that are standing in their way. The tree-sits have been the best and only injunction against the destruction of the land so far.

On this page, you will find an overview of the current tree-sits along with information about how you can visit and support them.

General information: California Highway Patrol has maintained a policy of restricting access to the tree sits in an effort to “starve them out.” In the case of recent tree sits that have now been evicted, they maintained a 24-hour watch, complete with blinding spotlights, and threatened to arrest anyone who attempts to enter the areas below the tree sitters.

It is always vital to have people on the ground in the vicinity of each tree sit, for ongoing legal observation and to show the tree sitters they are appreciated. Bring cameras or video cameras if you have them. To arrange a donation of food or other supplies for the tree sits, or inquire about current needs, send an email to [littlelakeactioncamp@gmx.com].

Update: Sadly, much forest has been lost recently, and Caltrans contractors cut the trees that the first five tree sitters inhabited, after forcibly evicting them. In the last month, Caltrans has devoured large stands of oak, madrone, and pine trees and fed many of them in to a chipper machine on site. But there is still much that remains to be defended.

The latest tree sit was discovered on April 16th in a stand of very large old alders above Haehl Creek, directly in the path of Caltrans’ bypass project. For more information about this new tree sit, look here.

On Saturday, April 6th, a woman who goes by “Owl” ascended into an old oak tree near the banks of Haehl Creek, only a few hundred yards from where The Warbler was perched and almost immediately next to where one of the other tree sitters, Eagle, likewise made his stand in an ancient oak.

Owl’s tree is between 150 and 200 years old.  It is right near the downed trees where Caltrans conducted its cutting spree of recent weeks.  Because Owl’s tree is in a federally designated riparian area, it does enjoy a greater degree of legal protection than the trees Caltrans has cut so far.  Legally, the tree cannot be cut down until June.  However, Caltrans’ well-established pattern is to thumb its nose at the law, and we expect that its treatment these National Marine Fisheries Service-designated riparian areas will be no exception.

Owl says she is no stranger to living in the forest with few conveniences.  She lived in a redwood forest for nine months with a group of other people.  She says she sees the struggle against the Caltrans Bypass of Willits as a continuation of hundreds of years of assaults on people’s right to access the commons: in other words, cultural and natural resources accessible to all members of a society, including natural materials such as air, water, and a habitable earth — resources that are held in common, not owned privately.

In Owl’s words, “This is just another example of a company taking public land for private profit with the backing of law enforcement that are supposed to be protecting the public.”

Warbler’s tree-sit was the first, established on January 28th, 2013. Her platform was located 71 feet up in an old ponderosa pine tree she has named “Liberty Ponderosa” on the east side of Highway 101 south of Willits, at mile-marker 43.74. For more information about the initial impetus for this tree sit, see the AVA article, The Warbler and The Willits Bypass.”

On March 28th, the two-month anniversary of her stay in the tree, Warbler began a hunger strike, with three demands—principally, a halt to bypass destruction. She continued the hunger strike until April 10th. For more information on her hunger strike and extraction, see this post on the front page.

The Pine Grove tree sits started in the early morning of Monday, March 18th. They were located in a ponderosa pine grove near DripWorks off of East Hill Road.

The two separate platforms were high up in the grove and anchored in to four additional trees by traverse lines. The young men occupying these trees went by Caspian and Celsius. Their tree sits ended violently, with a California Highway Patrol SWAT Team firing bean bag pellets upon Celsius following a roughly three-hour chase through the pines. For more, see this page. 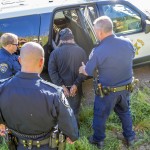 Chevalier heads to jail in Ukiah. Chevalier locked down to bring awareness to the Army Corps of Engineers failure to hold Caltrans accountable to their mitigation process. 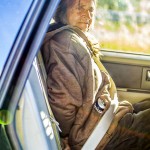 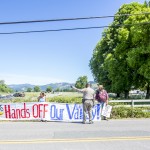 SOLLV members hold a “Caltrans, Hands off our Little Lake Valley,’ as Caltrans prepares to bring in the first 90 foot piling to begin test-driving them into the ground. 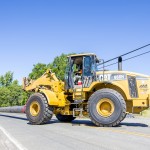 Caltrans prepares to bring in the first 90 foot piling to begin test-driving them into the ground. 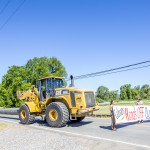 SOLLV members step in front of the machinery. 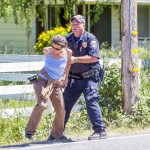 SOLLV member Sara Grusky walks down the side of the road, where she is unintentionally arrested for trespassing. 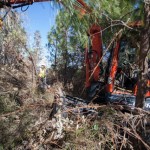 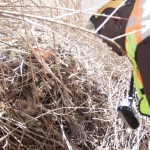 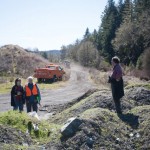 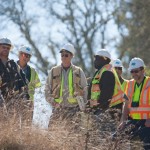 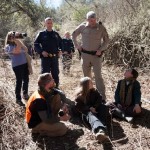 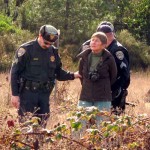 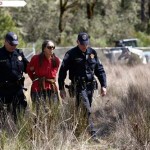 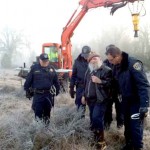 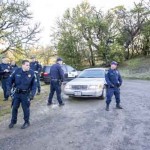 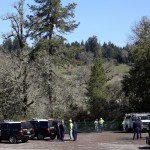 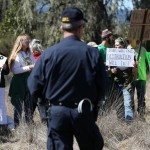 CHP Military Occupation of the bypass begins. 8 are arrested in civil disobedience. 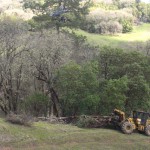 Dragging away an oak tree–Warbler’s sit visible above. 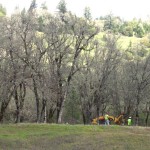 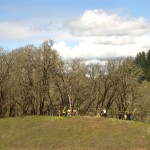 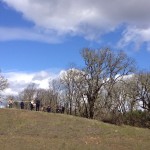 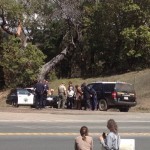 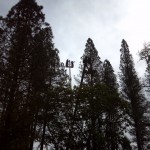 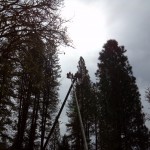 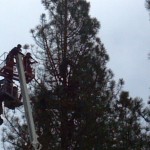 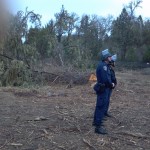 CHP watch from a distance, with typical cut tree in background. 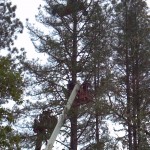 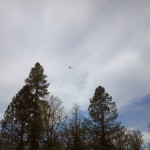 WE CAN STILL DOWNSIZE!